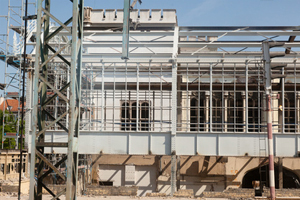 No matter where you go, the world steel industry is growing at a very fast pace. An increase in demand has been catapulted by real estate and infrastructural development projects in developing countries, however the recent adoption of liberalization policies in many Asian countries is a definite influence as well. While some countries have claimed dominance in production over others, most notably in India where economic growth is on the rise as well, steel industry growth is happening all over the globe.

The United States once dominated the steel industry on an international level, however recent acquisitions by Indian steel companies has helped bolster rapid growth in the Asian market. Tata Steel of India (TISCO) was able to acquire Corus, the fifth largest steel company in the world, earning the highest ever stock price in the industry. Holland-based Mittal Steel recently acquired Arcelor Steel, renaming themselves Arcelor-Mittal and becoming the world’s largest steel producer. It is clear that the steel industry is in the midst of a revolutionary evolutionary process.

Supply & Demand
Part of the reason behind the growth experienced in the world steel industry is an increase in demand worldwide. As many developing countries require more and more steel for infrastructural projects, steel companies working within that region were pushed beyond their capacity. As a result, some of these companies began working with and even acquiring other companies to meet the increased demand.

Looking at the overall history of the steel industry, the first big growth that was experienced occurred between the 1960s and early 1970s when global steel consumption doubled, growing at a rate of 5.5%. However, the market decelerated beginning in 1975, slowing again in 1982 and stabilizing before beginning to grow again in the early 1990s.

Developing countries such as China, India and South Korea have overtaken the market, which was once dominated by Organization for Economic Cooperation and Development (OECD) countries back in the 60s, 70s and 80s. As these countries continue to grow, the balance of industry trade has tilted in their direction.

As the global economy improves and stabilizes, other markets are seeing a rise in consumer demand. In addition to developing countries, these industries are also turning to the steel industry for their needs. The automobile industry, the oil and gas industry, the infrastructure industry, the construction industry and the container industry are all increasing their consumption of steel.

Other Changes & Influences
The steel industry is also growing on the technological front. Many of the new technologies that are being developed in the steel industry work to cut costs and maximize productivity. Other developments focus on creating new products using cutting edge technologies, such as the use of thin slab casting, vacuum degassing, electric furnace, continuous annealing and other techniques.

Currently the steel industry is working near capacity in order to meet the current demands. As development continues around the world, the pace of this demand will only increase. The global steel production level crossed the 1000 million ton mark in 2004, with China ranking #1 in the world at that time for steel production. The quality of steel products is also on the rise. According to World Steel Dynamics, the US, South Korea and India have all been categorized as Tier II. The top products currently come from the EU and Japan.

Tomorrow and Beyond
No one knows how much more the steel industry will grow in the coming months and years. As the global economy changes and more countries begin development, chances are the demands for steel will continue to increase. Countries like the United States, who once strongly held the top title in production and quality, will need to step things up in order to stay competitive with Asian nations, such as India and China.